In 2014 I have completed many projects, delivered some great results and learned a lot. One project which has been very close to my heart has been that or writing my first book. It’s called “Get Projects Done”. Let me walk you through my journey and how I planned it.

In my head I had a lot of ideas that I felt would make a good book. However, I felt the need to write a book that met some key criteria. These were:
– They were based on my experiences in an area where I have executed a lot.
– Addressed the needs of a specific group.
– Had not been commonly written about – I am not claiming that they are unique.
– I could write the book within 6 months and then get it published.

A number of ideas came to mind. One was a book on how to “Get Projects Done”, targeted at the people who actually deliver the work that makes up projects, and not at project managers. The second idea was for a book called “Recovering Troubled Projects”. Then I also had some ideas for eCourses, but felt that they should come after I had written a book.

I have been delivering projects for a long time; over 25 years now. During that time, I noticed that people working on the projects had a good idea how to their specific work, but did not always appreciate how it fitted into the overall project plan. Allied to this, the team often looked on the project manager as purely an authority figure, who spent most of their time concerned about either schedule or budget. I felt that there was a real need for a book that explained the finer details of delivering projects to the people who actually do the work. Tending towards more project delivery, and less project management. This resulted in a book called “Get Projects Done”.

Another related topic was that of projects failures or near failures. Many, many projects get into trouble and end up either under delivering, being way over budget or failing totally. On many occasions, I have been called into such situation to rescue the situation. There is a lot of commonality with respect to how to rescue the situation and this is what I planned to write in a book called “Recovering Troubled Projects”.

The next step for me was to look at how I would fit the writing of a book into my schedule, which book first and how much would I need to outsource (editing, design, marketing). I mapped out a rough work breakdown structure for writing a book and from this developed an outline scope of work (list of task, risks, assumptions and resources) to gauge the scale of the undertaking. I did this for both book ideas.

Selecting which book first was not driven by the workload, as I felt that I had a lot of material available and getting to editing phase was a modest (relative term) ambition. So I made the decision to DRAFT both books and the select. Having drafted both (a total of 300,000 words!), I decided that I would go with “Get Projects Done” first, followed in 2015 with “Recovering Troubled Projects”.

Now that I had a book selected and I had a rough approximation of the work involved, the people I would need to work with and the new skills that I would need to acquire. I mapped out the work in detail and developed a schedule. Adhering to the schedule was a challenge, made tougher by the fact that after the editing of the first revision of my book, I decided that I needed to scrap the work to date and start afresh. It was a very tough decision and I thought for too long about how much time I was going to have to re-commit. Once the decision was made, the second version of the book flowed very quickly and I am very proud of it. I hope you will also enjoy it.

Next I needed to recruit a team to work with me. Apart from editing, I decided to execute all other tasks myself. In terms of editing, the first iteration was completed by a number of friends who offered their time for free. This was very generous of them and added great value. The second edition was edited by one person who had provided excellent feedback on the first edit. Her approach is direct, thorough and on-time, every time.

I also had to decide how I was going to publish my book. Either traditionally or self publish. I made contact with a broad range of people and did get an approach from a traditional publishing house, but was not happy with the terms of the contracts. And so I decided to self publish. This involved a lot of research. I bought a great book by Nathan Barry called Authority and digested it contents.

What tool to write my book with? What book cover? Do I need to get someone to create a sales page? How do I market it? How do I build a list of interested people? And on, and on it went. There is a lot to be done in order to write a book and you need to capture as much as possible up front, so that you can accurately estimate (code word for guess), when it will be done, who you need to work with and how much it will cost.

I put the details into a project schedule and locked the dates in. Now it was time execute.

So that is the phase than I am current in. It has been a long haul. 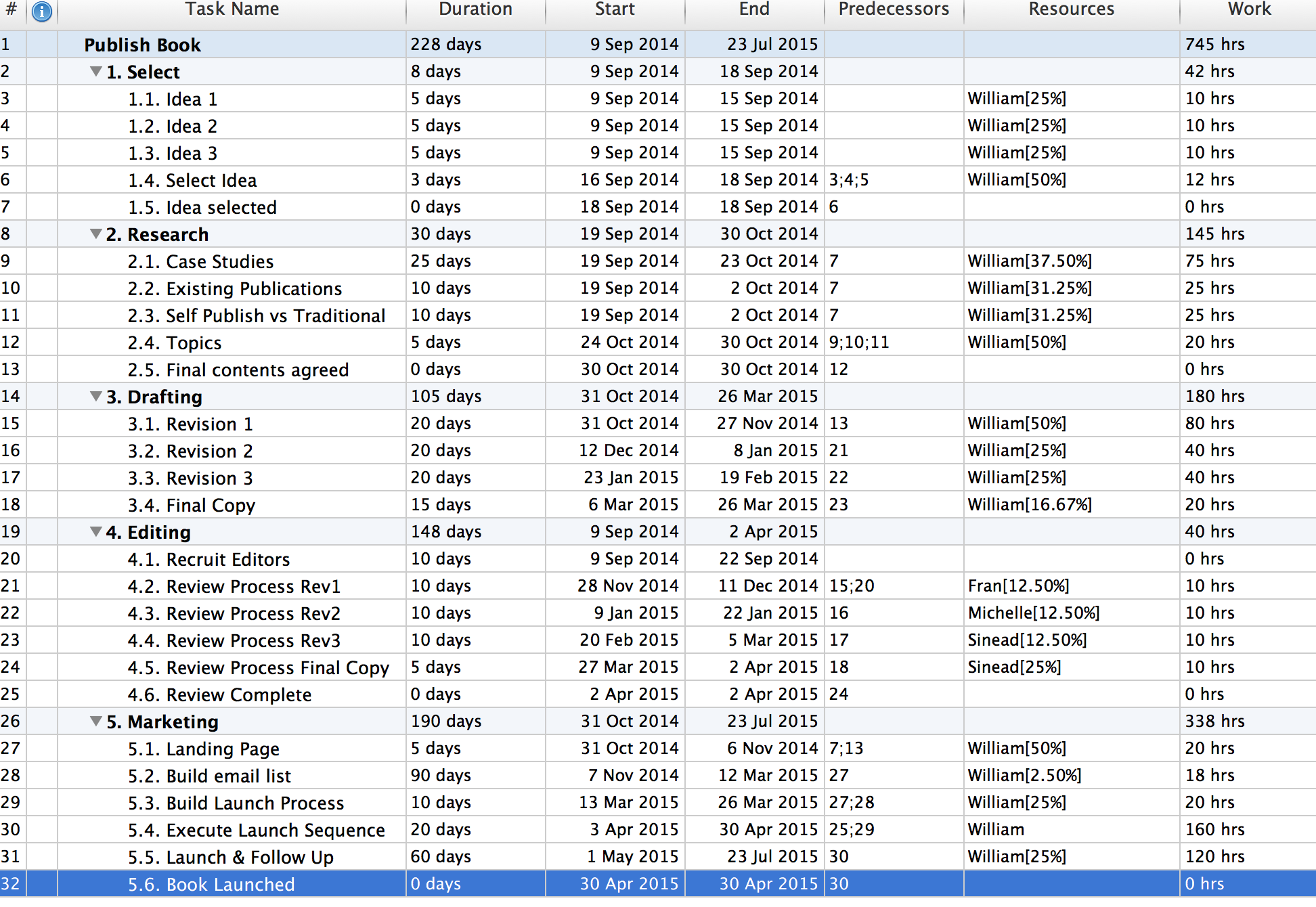 Writing. Emailing. Reviewing editor comments. Rewriting. Researching. Building schedules, scope of work examples and so the story goes. But, I am glad to say that it is getting close to the launch stage of December 12th, 2014. The work now is particularly intense. All details are being gone through to make sure it is correct. And despite this, some pesky errors will sneak in. Read and re-read. Gumroad trials. Marketing to make sure that as many people know about it (you can help by spreading the word!).

My focus is now totally on all the efforts to launch and I expect the last few days to be hectic. So I better get back to it.

It is never too early to start marketing.

Writing a book is a tough process, so you need lots of grit to see it through.

A good editor is worth their weight in GOLD!

I need to develop some basic design skills.

You have to ship, so declare a date and work towards that.

The book, “Get Projects Done”, will launch on Friday, December 12th, 2014 as an eBook and will be free for the first 24 hours to all subscribers. So, enter your details below and share this with anyone whom you feel would benefit from having the book.